I had a busy week and weekend, but found some time this afternoon to go down and work on the low bench. I had hoped to fit all the legs, drilling and reaming the holes then fitting the tenons and gluing in the legs.

I started out trimming the ends of the slab square the slab’s center line using the table saw. I’d never think of doing this without a crosscut sled to make it safe to cut such a large slab. It still took two cuts on each end, since the slab is too thick to cut off in one pass and I had to flip it over to finish each end. 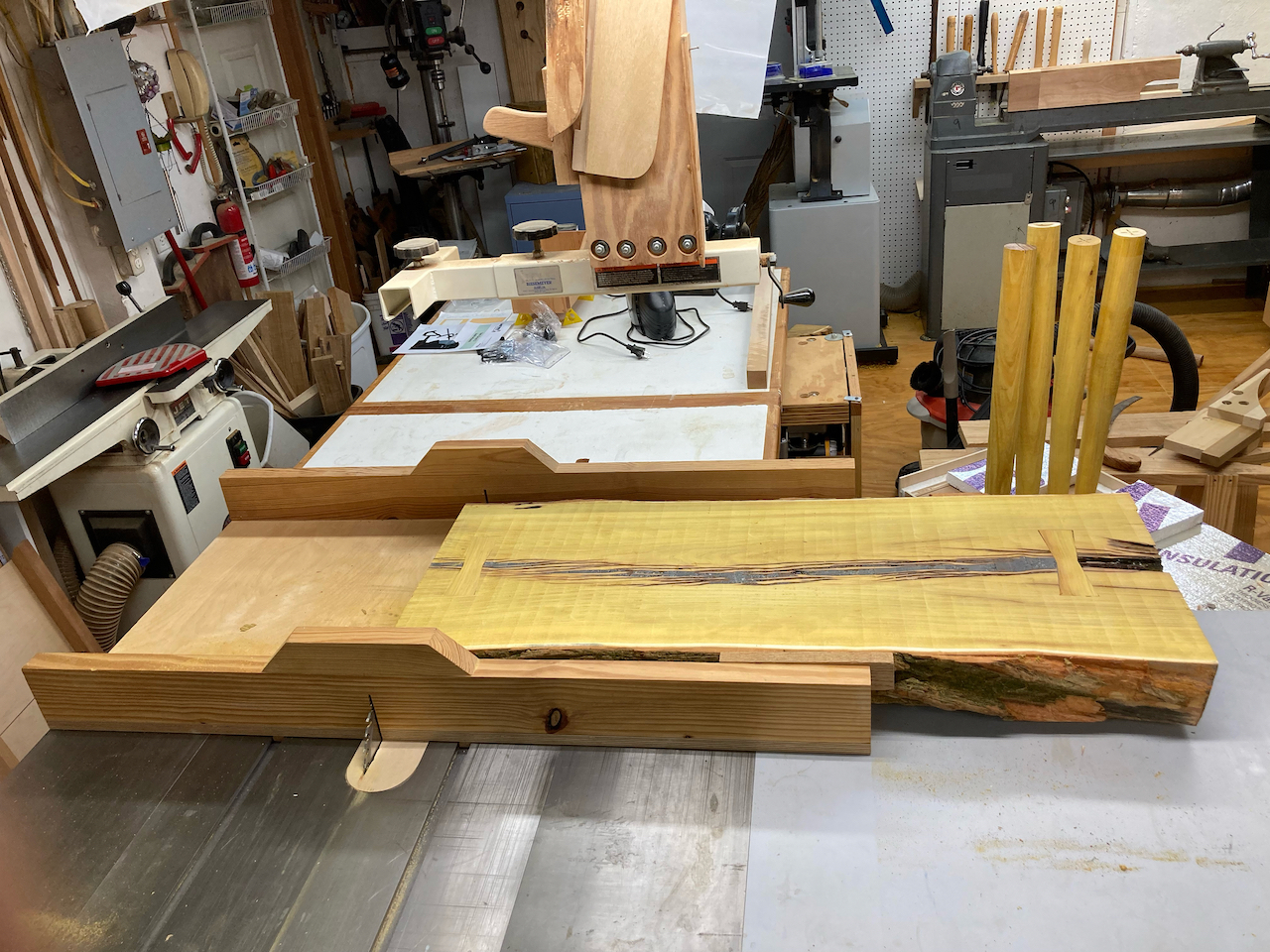 By trimming the ends I’d removed the wood sealer I’d applied long ago to prevent checks and cracks. I couldn’t leave the ends that way or they would quickly check and crack, perhaps quite badly. So I applied finish to seal them up. I’ll apply another coat tomorrow.

In preparation for drilling the leg holes, I set up both spade bits and auger bits for the larger diameters, marking how deep I needed to drill. I was hoping to use auger bits for everything but the largest 1 1/8" diameter. I don’t have an auger bit that big. But with Osage Orange being so hard I wanted to have the option of using a powered drill. I had my drilling diagram and my bevel square set to my resultant angle. 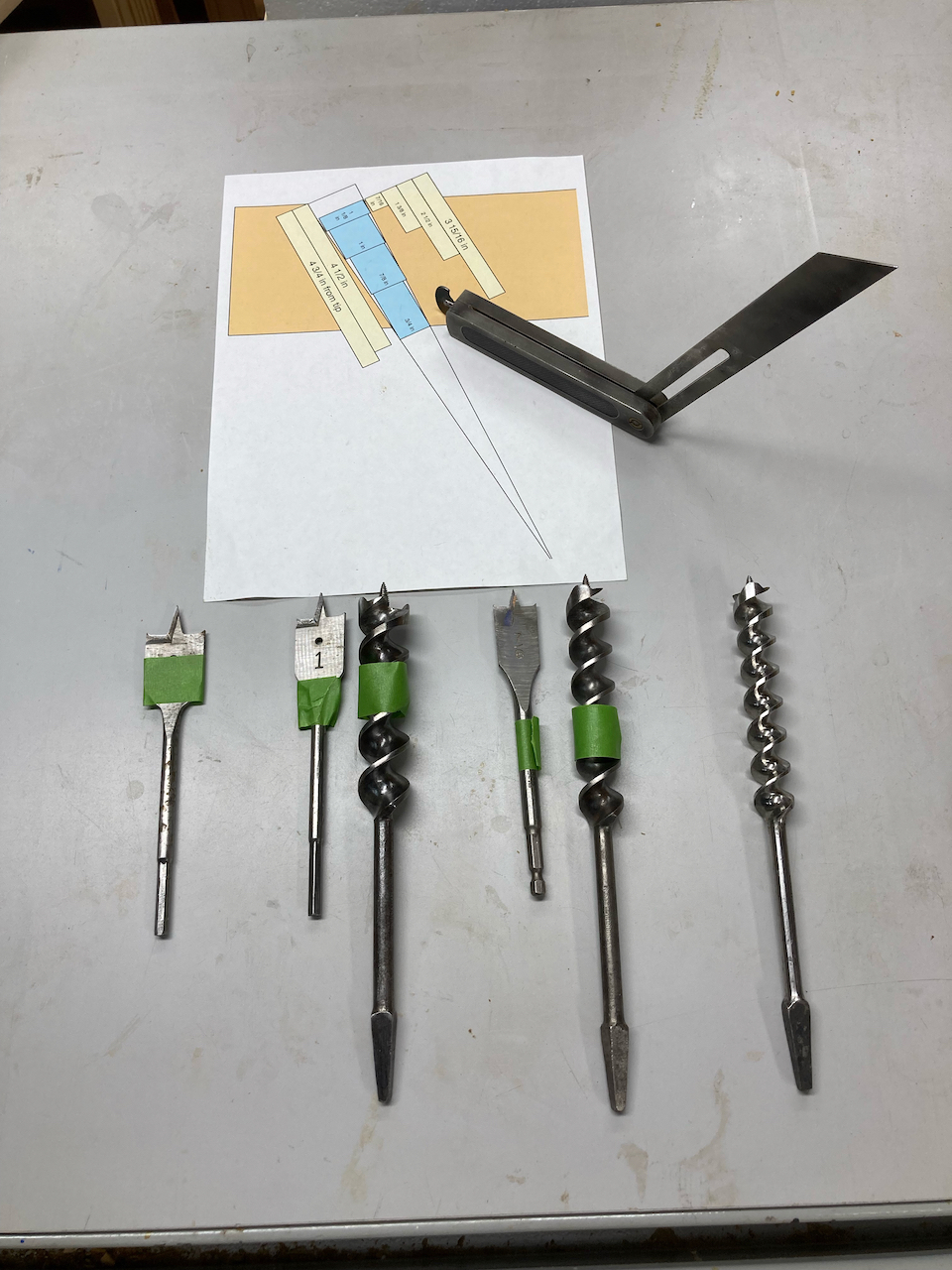 I met with mixed success, having to resort to a spade bit for all but the last diameter. The wood is so tough I was making something closer to dust than shavings. 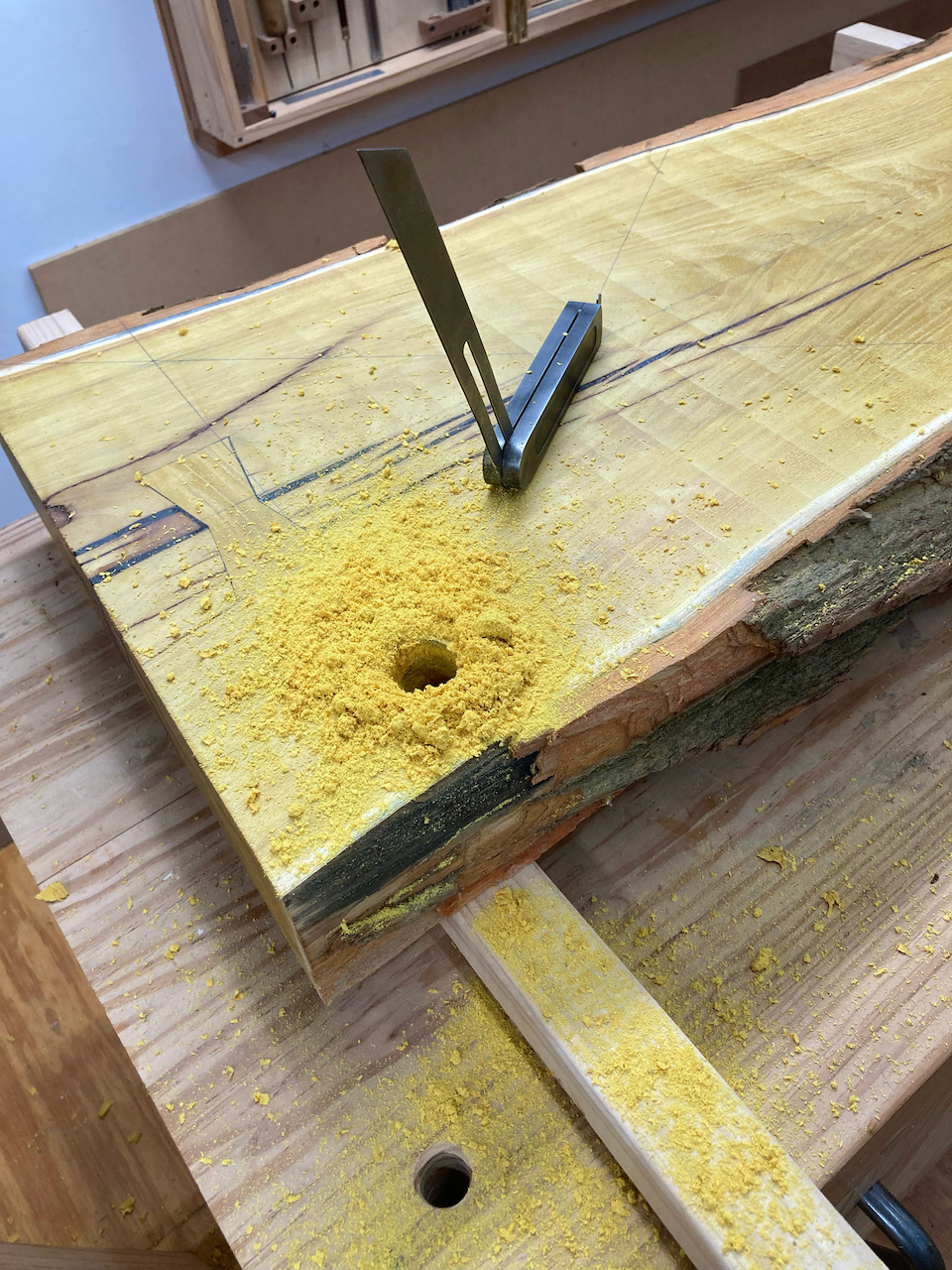 Tough wood to drill through

The spade bit tips left such a wide hole in the wood the screw on the end of the auger bits couldn’t get a good hold on the wood to start pulling the bit into the work. Still, I was making progress. 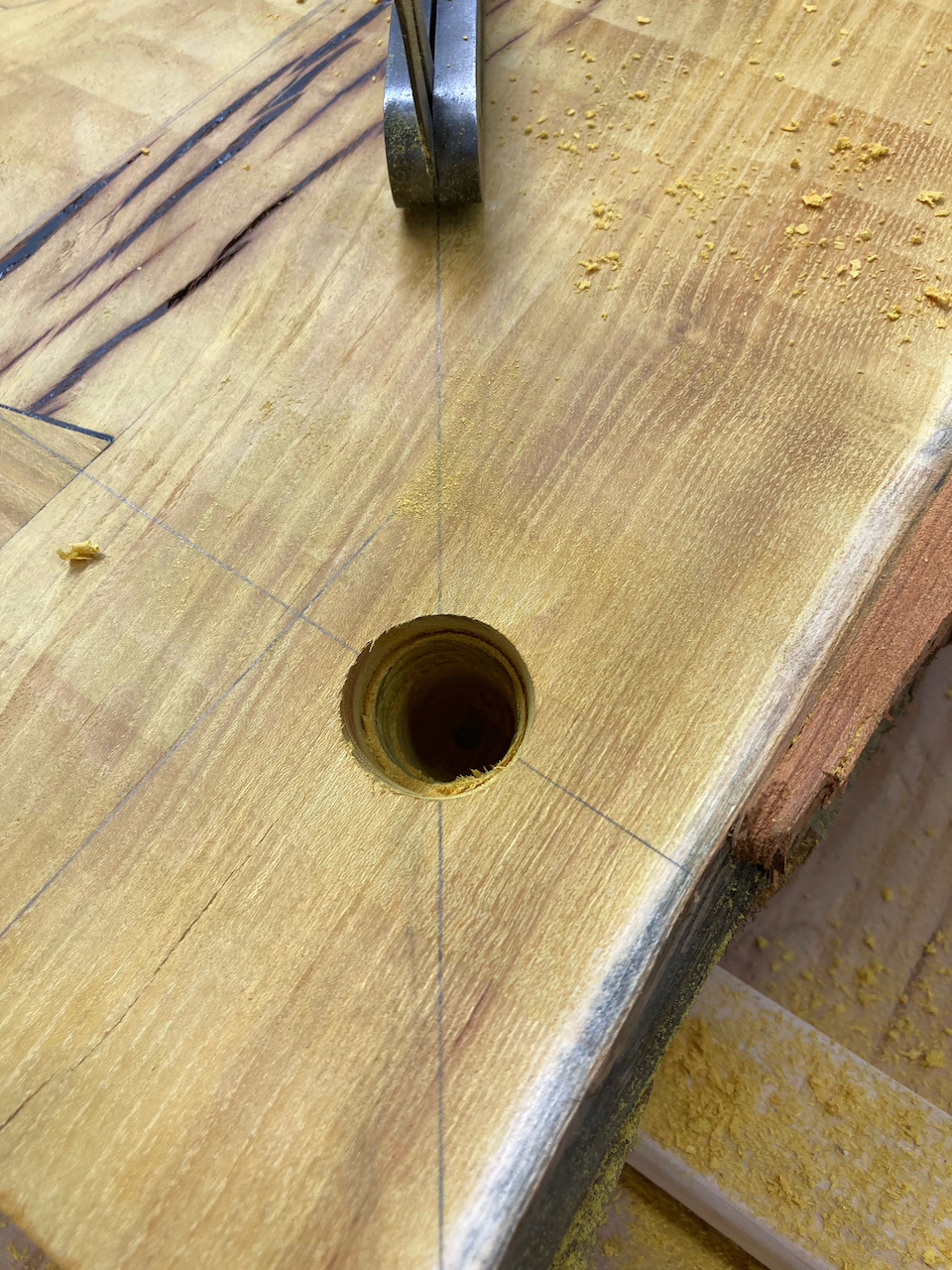 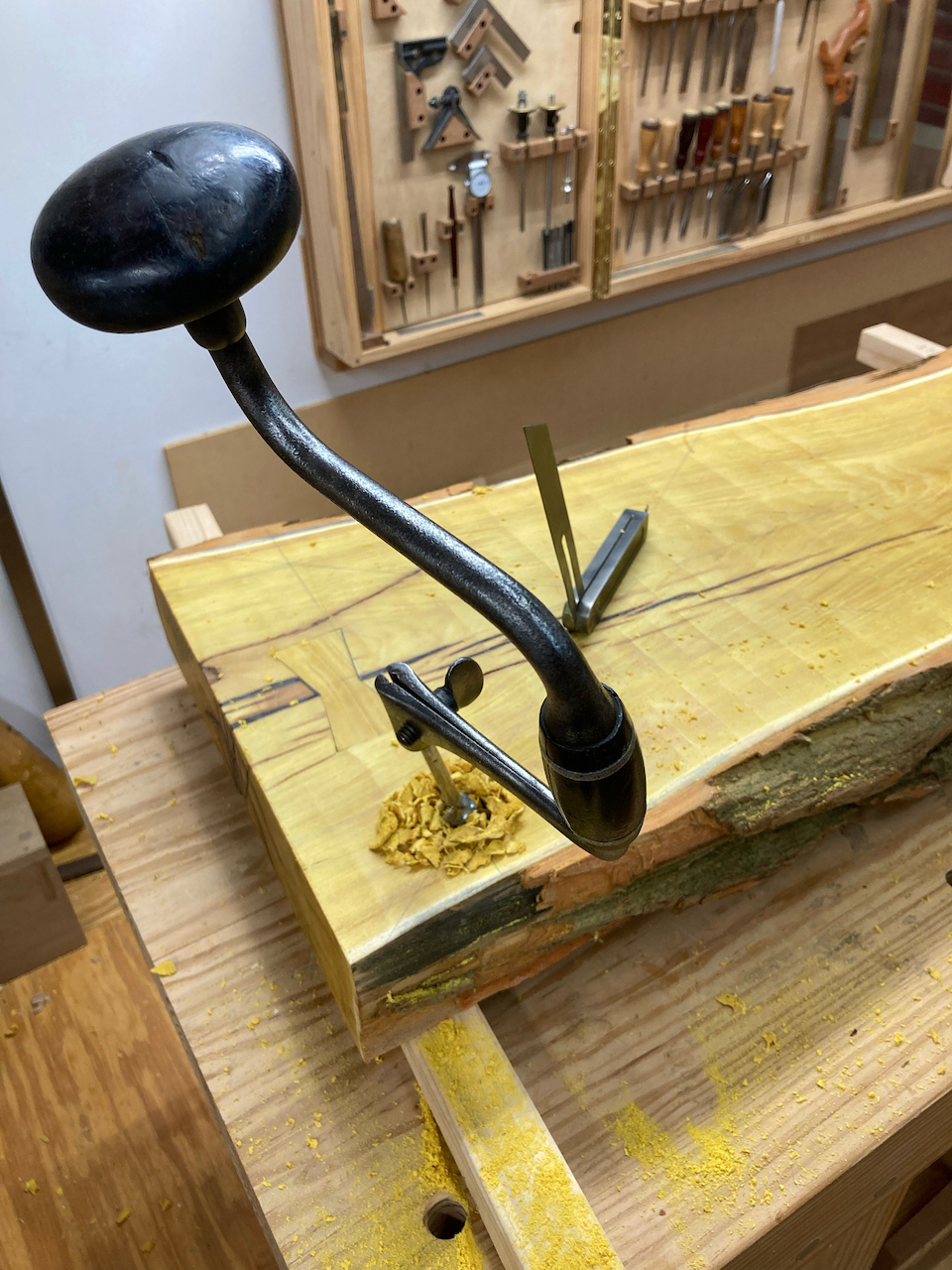 It meant I could drill until the screw tip was just poking through and not blow out the top of the bench. 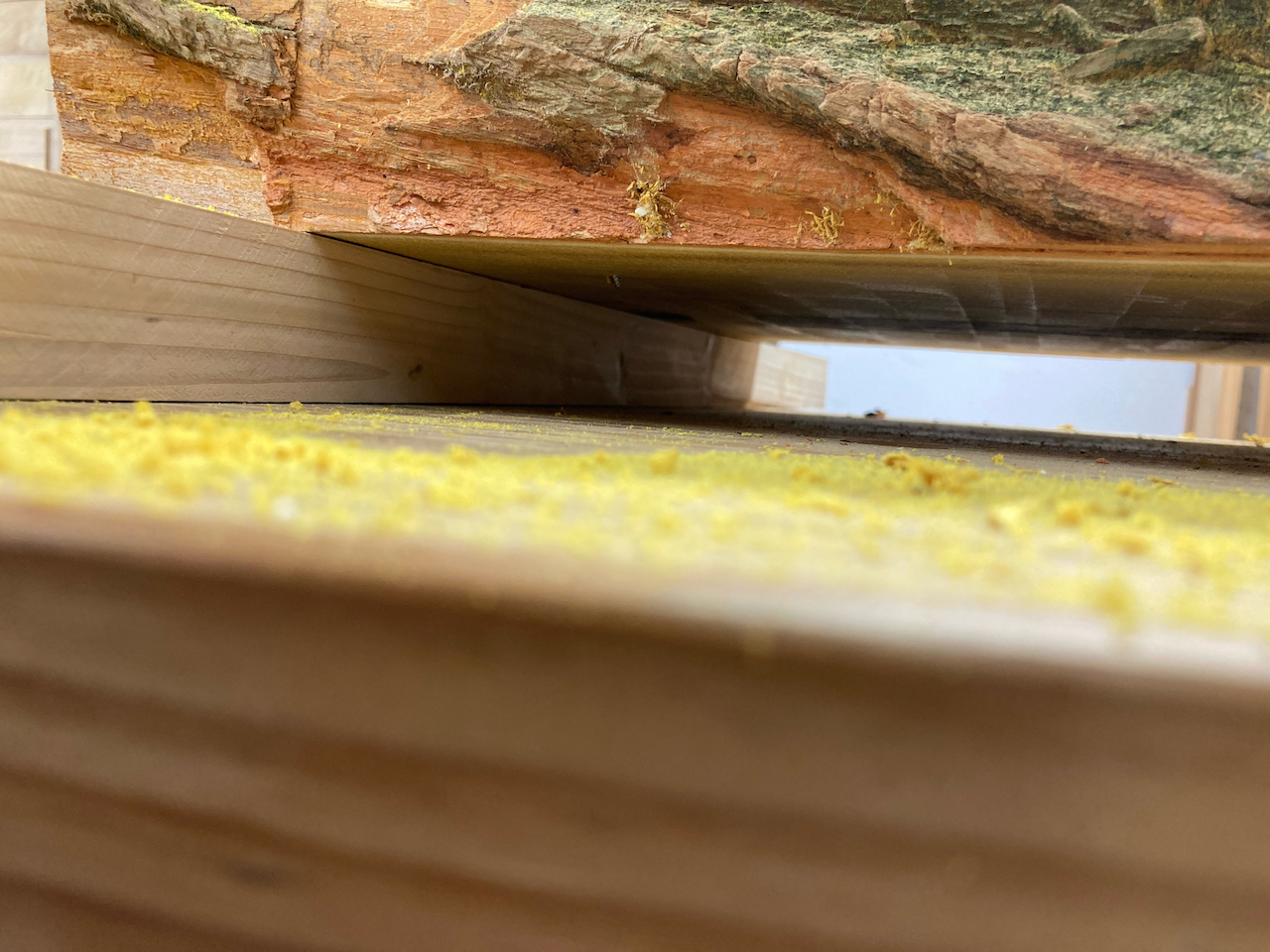 Then I flipped the slab over and met the hole from the top to reduce tearout on the top. 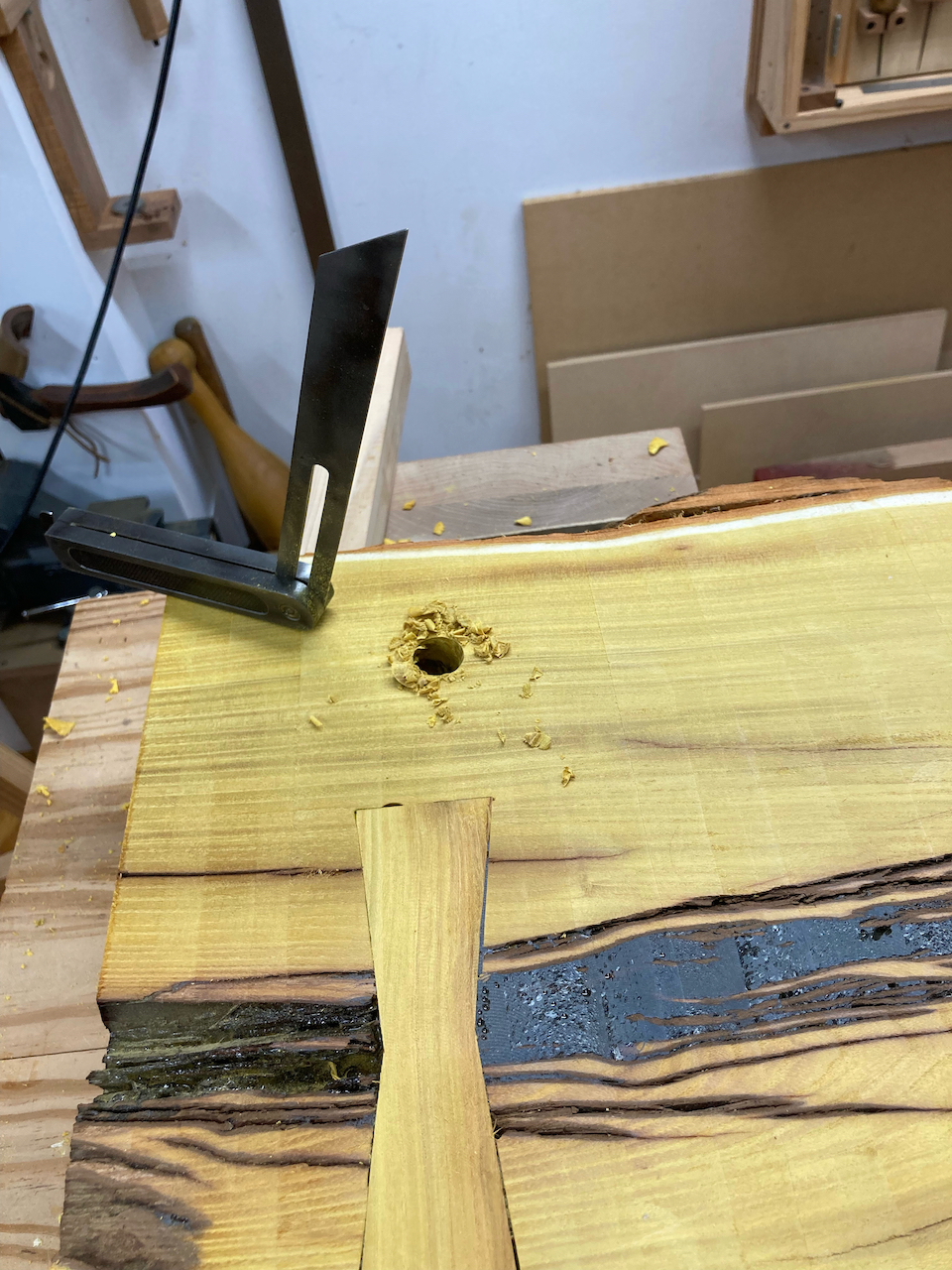 Hole finished from the top to reduce tearout

That left me with a hole ready to ream. 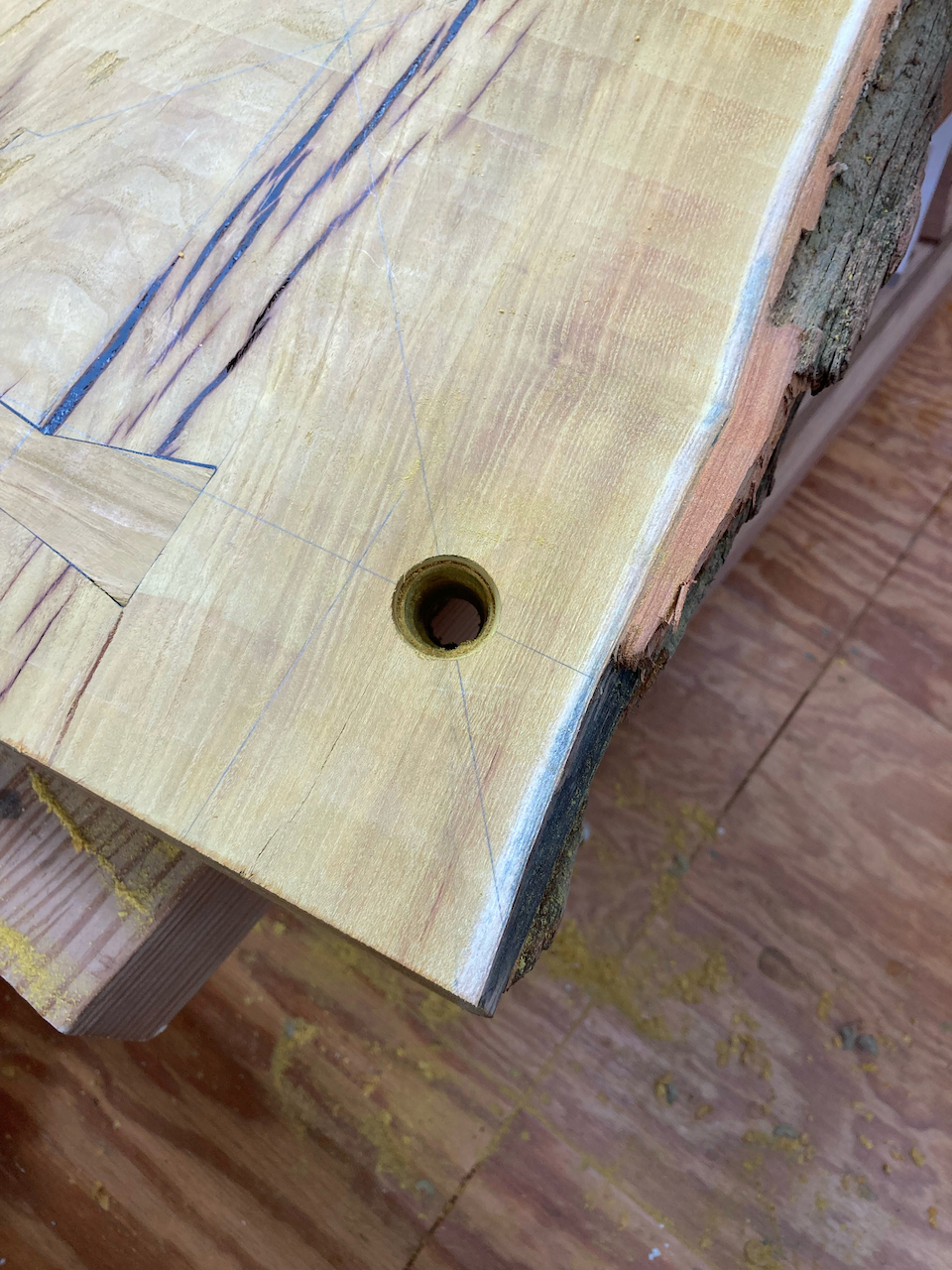 I was excited to ream out the hole and fit my first leg. It turns out Osage orange is so tough I can’t ream the hole wider once I’ve established the taper. I tried for quite while, with no luck. I resharpened the blade of my reamer and it didn’t matter. Learning that lesson took quite a long time.

So it was time to flip the process. Instead of reaming the hole to the tapered leg, I would taper the leg to the hole.

I see why no chair maker would ever want to do it this way. It takes a long time, and is quite finicky. I would test fit the leg, rotate it enough to see where the leg was rubbing against the inside of the hole, and go back to turn a bit more. It was a very delicate process, and very time consuming.

But it worked. I was able to fit the leg well. I cut a kerf for a wedge on the top of the leg tenon, trimmed the tenon within about a 1/4", and glued the leg in place. I put glue on one side of the wedge I’d made and drove it into the kerf in the leg, but I guess I was tired and it made me sloppy. I broke off most of the wedge while driving it in. But the wedge was well seated at that point, so no real harm done. 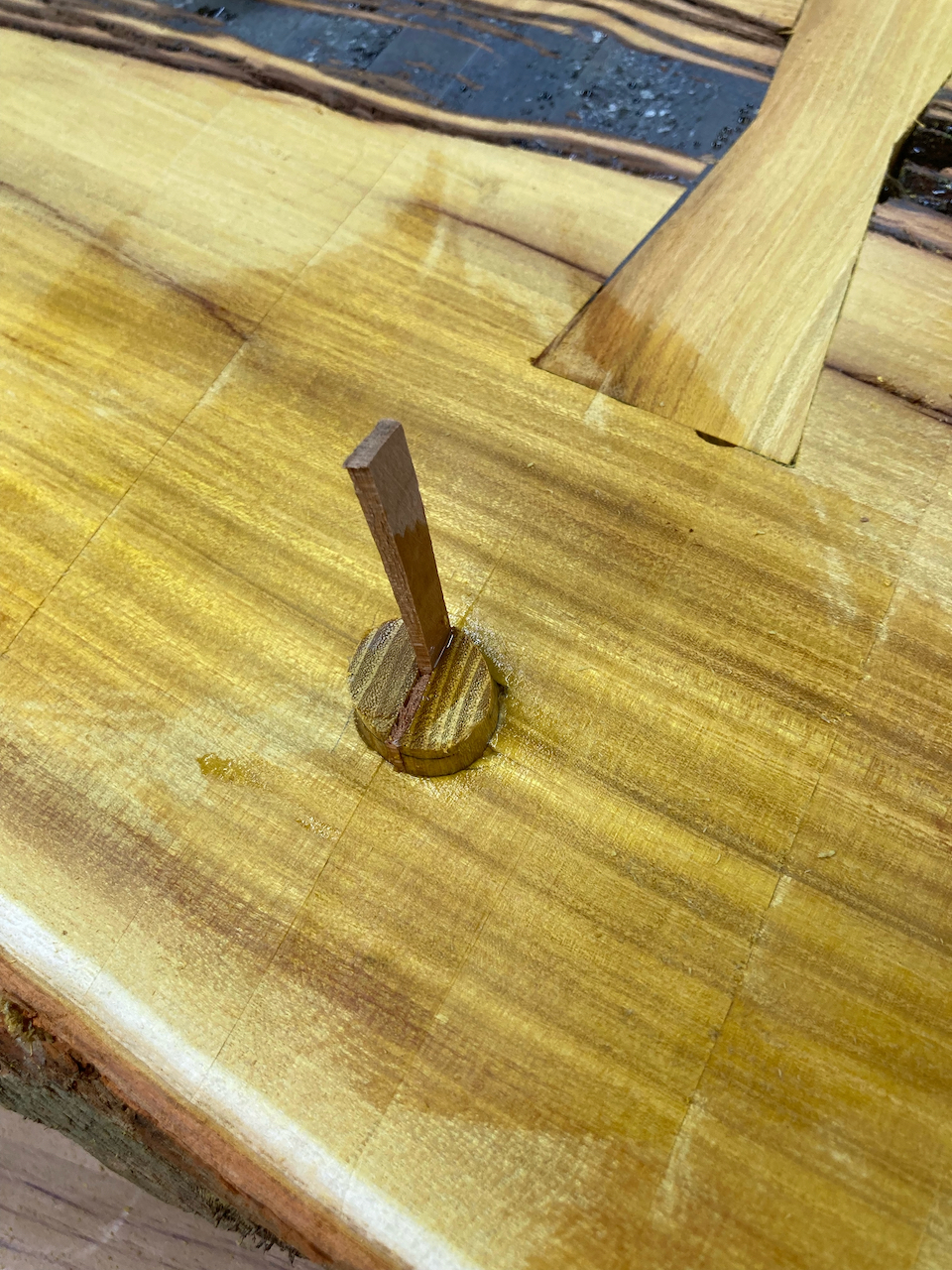 If you look closely, you can see some tearout in the surface of the slab around the hole. For the low bench that’s no big deal. But I’ll want to avoid that when I’m actually fitting legs into the seat of a Windsor chair. I’ll have to pay closer attention with the remaining legs to figure out what I did wrong.

I wrapped the whole slab back up in an old sheet and will go after a second leg as soon as I can find time. 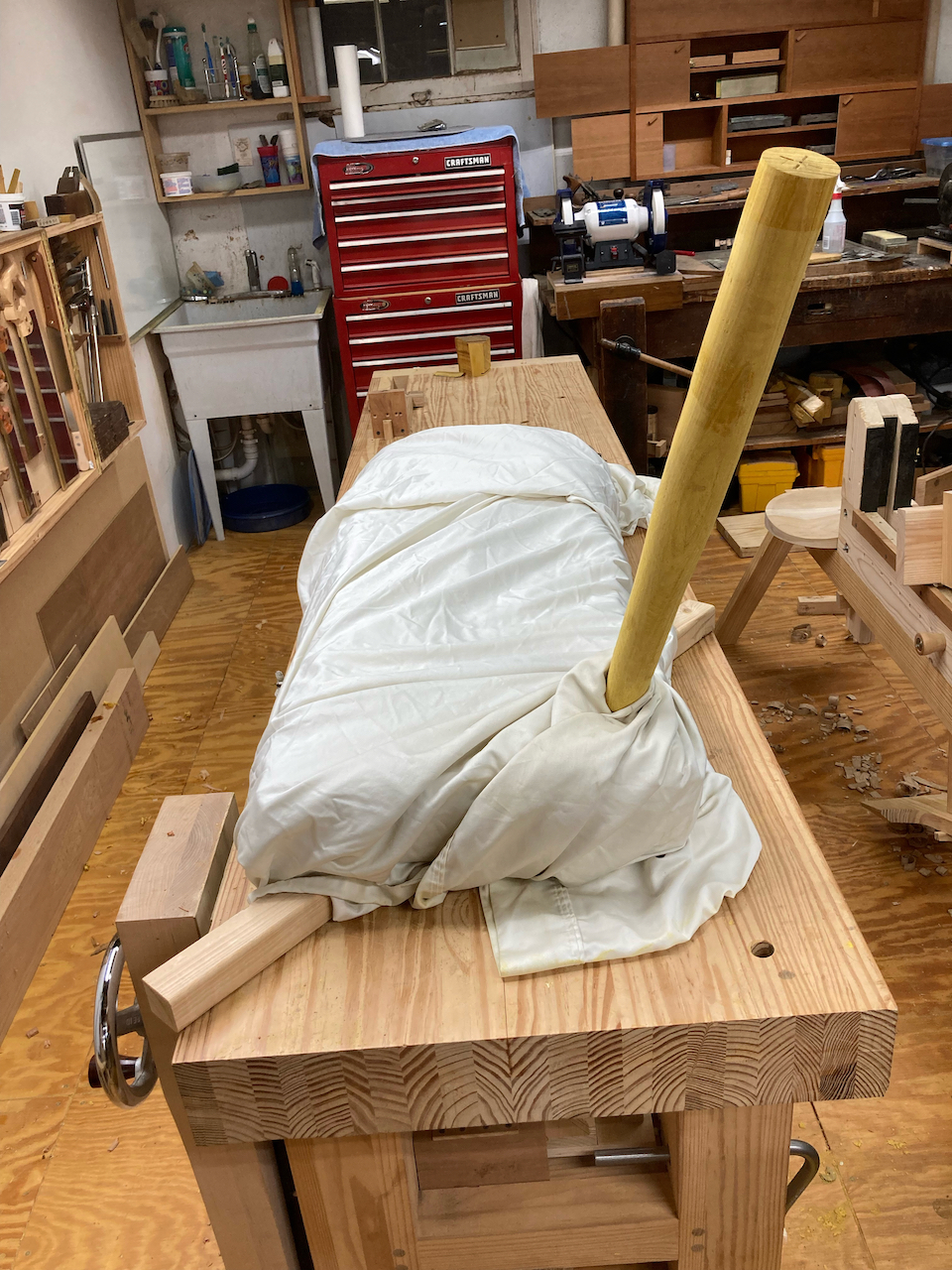 One leg done; three to go